Gallery owners reckon that the South African art scene is intoxicating currently. It’s a period in which the country is producing wildly impressive talent. One of these up-and-coming artists is a young man who is grabbing the attention of South African art lovers and shaking up the local Pop Art scene.

South African born Adam Schlosberg left our shores some years ago after graduating from RAU (University of Johannesburg) to pursue a career in finance and found himself working in the New York stock market. He was an instant hit, a highly intelligent young man with career prospects that most can only dream about. And yet he also found himself strangely uninspired.

Although Schlosberg loved the pace and lifestyle of New York, he was craving the stimulation that he had always found in the artistic expressions of his youth and at the same time, was witnessing some of the most profound and inspiring work he had seen in years in the galleries of Chelsea, Manhattan where he lived. The works of Mr. Brainwash and Alec Monopoly’s contemporary Pop Art continued to tease him from gallery and city walls. Their use of famous icons, repetition and popular culture – interwoven with traditional Pop Art – drew him in, causing him to visualise his own colourful and satirical images. 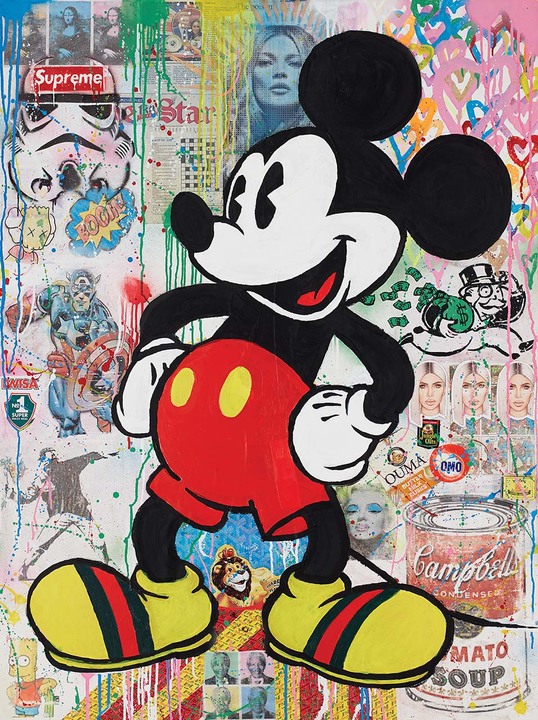 It was at this point that the budding artist decided to take an enormous leap of faith. Schlosberg quit his job in finance and returned home to weave a new tale, a story of South African Pop Art. He began by posting his work on Instagram for fun and found his popularity unexpectedly escalating. His works present as tapestries of images we know and love as well as a subversion of our political strife.

Never negative, never serious, Schlosberg elevates our country’s well-known products, famous icons, and questionable political leaders and recreates a vibrant, textured and cheeky perspective. All the elements of the original Pop artists that have inspired him are there, but he manages to sew in a local flavour, which stirs up a feeling of recognition, belonging and hope.

He also employs the device of surprise in his ‘Where’s Wally’ approach, allowing the viewer to make continuous and entertaining discoveries. Adam Schlosberg is an extrovert, and his flamboyant attitude is indeed apparent in his vivid works of day-to-day popular items such as OMO and Chappie wrappers. Add the societal capitalism and materialism of 2019 lives that seem to speak to the very core of our self-worth, a theme that fascinates Schlosberg. Gallerist Candice Berman discovered Adam Schlosberg and has nurtured his talent by giving him the exposure he needed to embark on this exciting and adventurous ride.