Situated in the sought-after suburb of leafy Bellevue Hill in Rosebay, Sydney, this newly built home has rapid access to public transport and back routes that avoid main roads and heavy traffic. The property sits on the edges of a park and reserve where a long established rain forest offers several walking paths. The harbour and Marina is a short 20-minute walk from the house, where there is a small beach reached through the charming community-vibe suburb of Double Bay. Bondi beach is close by and the city is a 15-minute drive away.

The house is built in brick with stained Tallowwood façade.

Aesthetic- and ambiance-wise, the neighbourhood of Bellevue Hill could be compared to Lower Hillbrow and Hyde Park in Johannesburg, during their respective halcyon years. An old, single-storey red brick home existed here when the property was purchased.
The owners travel widely and are long-time clients of architects Van Rooijen Meyers + Partners. Architect Gary Meyers comments: ‘A very elegant, contemporary brief was agreed upon, with the client who insisted on maximising space, ventilation and light. Other goals included a low-maintenance home with two lifts (one a courtyard lift), undercover security entry, and a swimming pool and a spa bath. This brief proved a most aligning venture and a challenge but having completed five large houses for these clients since 1988, we understand each other. They appreciate that space maximisation is my forte. 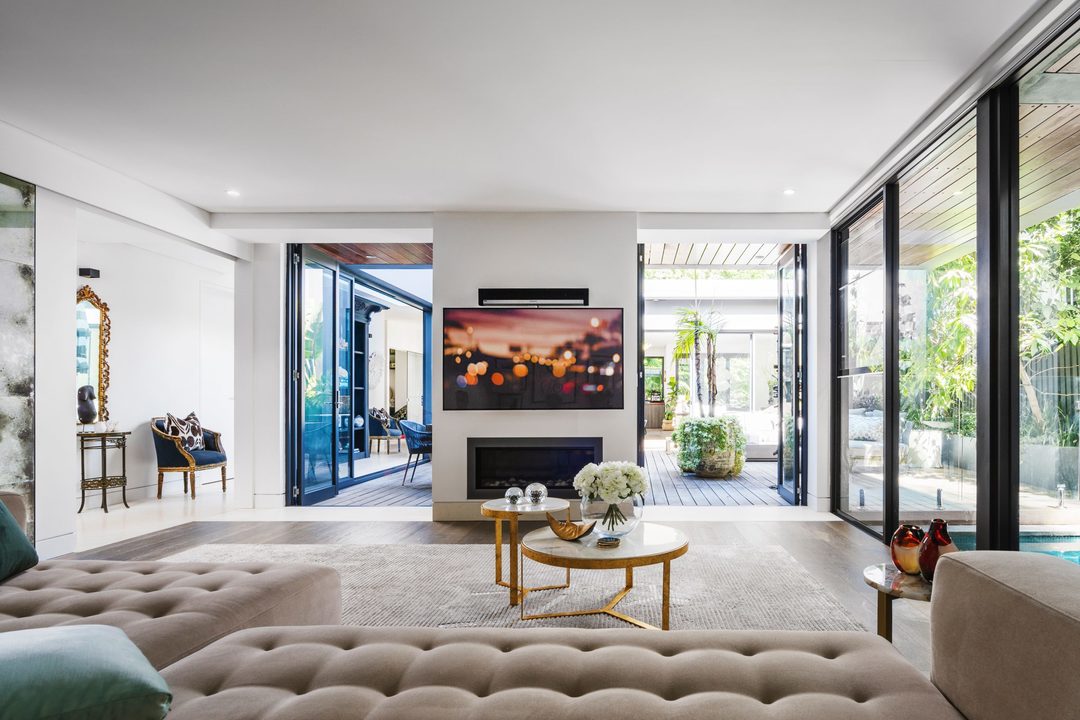 ‘This particular build took 18 months from start to finish. Neighbours are often difficult and the council process is tough. It took four to six months to design the structure and council took one year to approve it.’

The house has four en suite bedrooms and two separate living areas. The kitchen area incorporates dining, plus a fireplace and living / entertaining space from which views are provided of the courtyard and garden. A second living room exists across the courtyard and is dedicated to screen and relaxation time around a fireplace. Large floor-to-ceiling windows separate the interior from the pool area and the ambiance here is very appealing due to the pool light configuration.

The large painting in the kitchen/living area above the fireplace, is an original Aboriginal artwork by Gwenda Turner Nungurrayi, titled ‘Sandhills’ and painted in Alice Springs, in Australia’s Northern Territory. In the auxiliary lounge, a lithograph of the face and torso of a woman is by South African artist Beezy Bailey and was sourced in Cape Town. Other artworks were purchased in Amsterdam, France and Alaska.

The vision for this home was to create a sense of calm and flow. The owners gave top priority to accommodating their three sons’ requirements. They add: ‘We’ve travelled extensively, and many pieces of furniture were bought on travels and some locally. We’ve collected many traditional objets d’art that relate to our history as a family, and so many have a story attached to their discovery. For this reason we are embraced by sentimental memories and a sense of adventure.’ 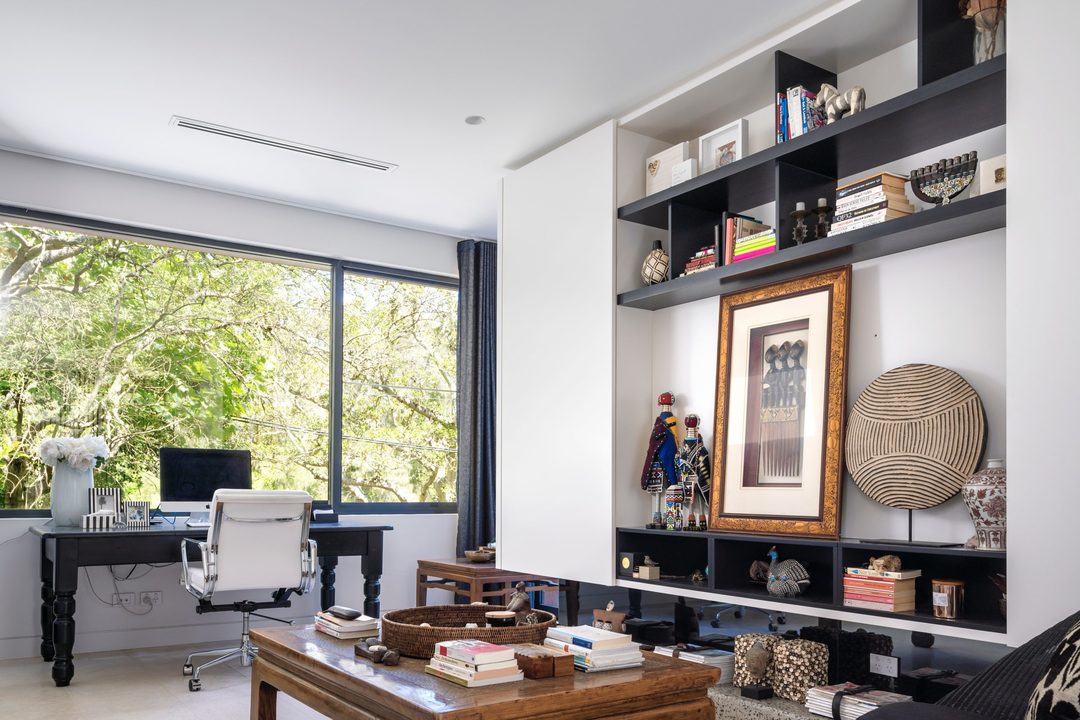 The internal courtyard is boarded on three sides by the house: the two living areas and a hallway where the children’s bedrooms are. French doors lead from the lounge area out to the courtyard. A triple sliding door opens up along the hallway, a signature repeated from the kitchen area. The space accommodates an eight-seater dining table, a four-seater lounge and a round daybed. The outdoor ethanol gas fireplace is an extra, very practical luxury and here, potted plants and a planter box on the boundary function as a privacy screen. 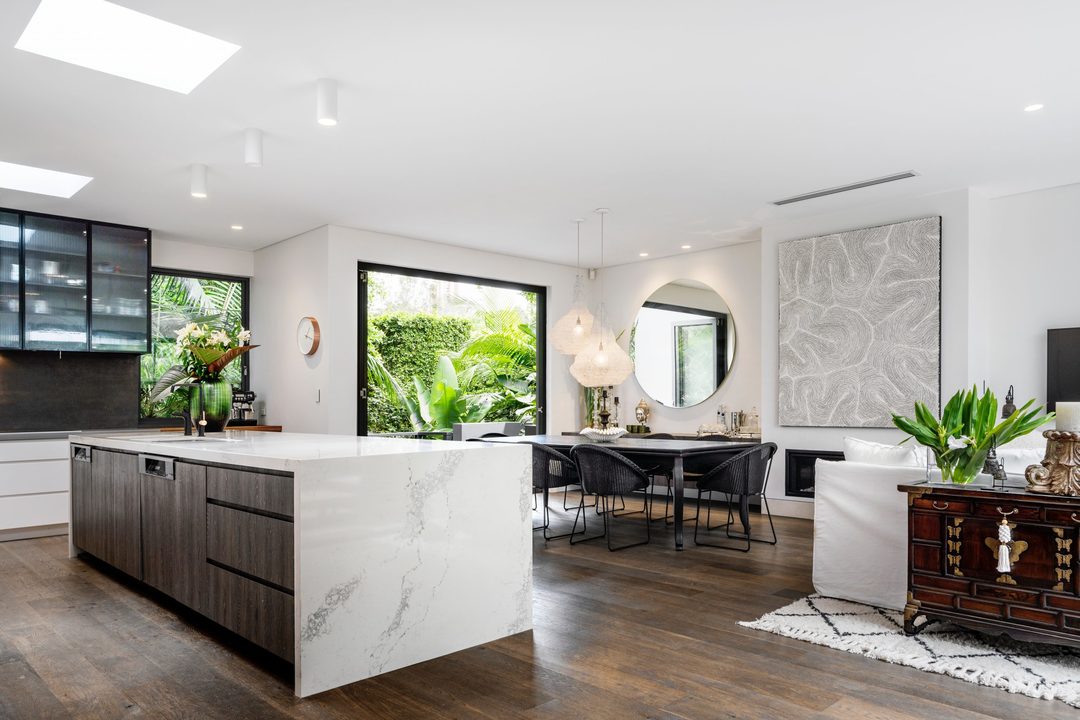 The other side of the dining area extends to a deck with stairs that accesses a paved area and tropical garden designed with privacy in mind, as well as some structure with hedges and several palms. The result is a tranquil outdoor space that remains lush year-round.
Says the client: ‘Overall, we love the easy vibe of the home with all the living areas on the first floor. Looking out to the courtyard through to other rooms provides a sense of spaciousness, despite the fact that this isn’t a huge home. Being enveloped by all the surrounding trees, visible through the many glass doors and windows, is so relaxing. My study is my favourite space – surrounded by indigenous art and objects from South Africa, Asia and South America.’

Gary Meyer adds: ‘I’ve realised that most difficult things are the ones worth having. I believe that if something is too easy it’s not going to last. Anything is possible when lateral thinking is applied.’

Deborah Coffey (former Editor-in-Chief of Elle Magazine and now owner of Manyara Homewares, Sydney) created balance and cohesiveness between the owners’ fixtures and key new items from her store.
The pool is 4 x 2.5m and the attached gas-heated spa bath is 2.5 x 2.5m.
The study’s large picture window overlooks the park across the street through a mass of trees.
There’s internal access from the three-car garage. A paved driveway leads up to the garage and has space for two to three more cars. A lift provides access from the garage floor to the living areas. 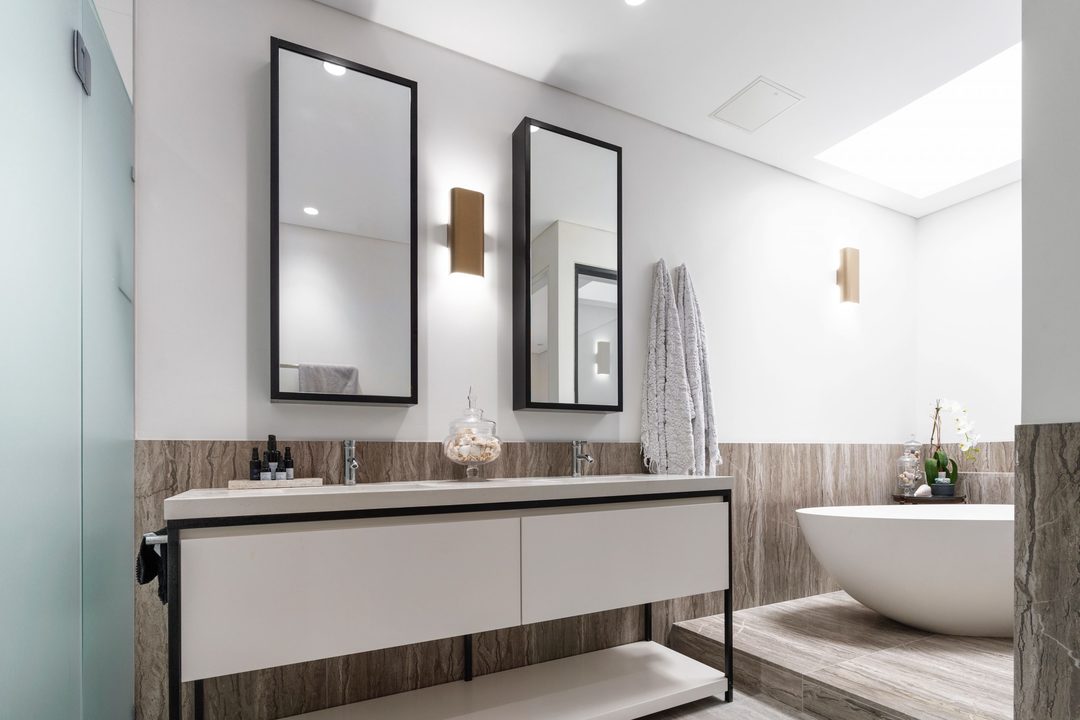