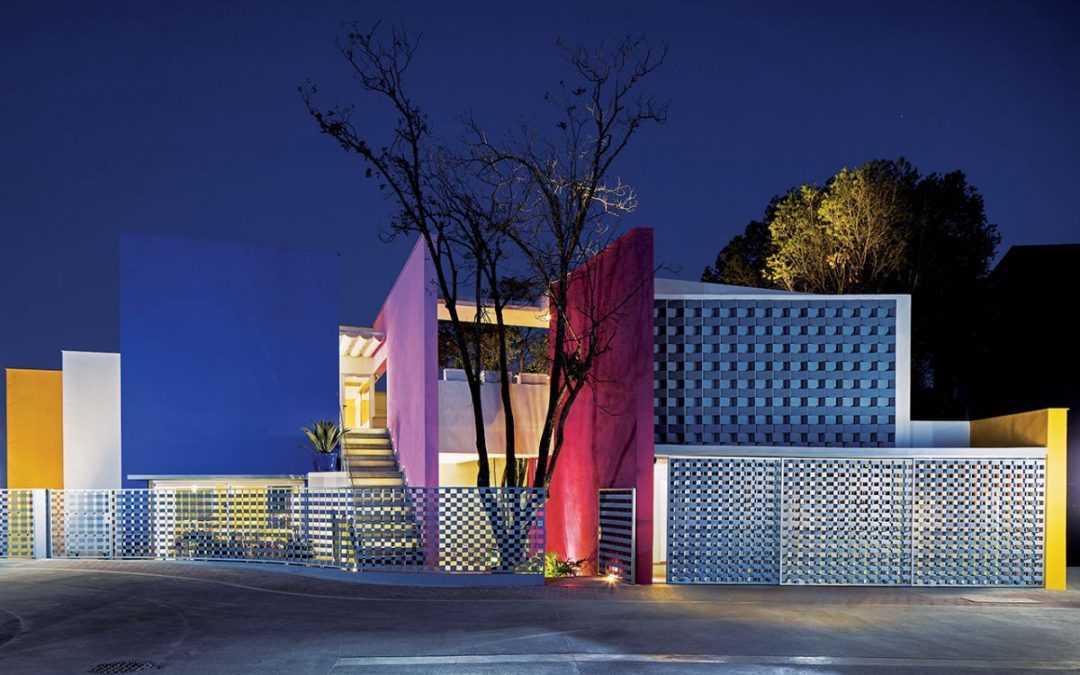 Casa TEC 205 is located very close to the Chipinque ecological park, an urban landscape dominated by the Sierra Madre, the omnipresent backdrop to the city of Monterrey. This house is the first prize in a raffle, organised every year by the Technological University of Monterrey to raise funds for its students. The site measures 725 square metres and the built structure 855 square metres.

Furniture was designed by leading international designers and prestigious brands with other more generic but equally exquisite pieces.

The house design follows a number of complementary motives. The first sought to preserve four large extant trees on the site: three walnuts and a glossy privet. In a context where house developments often raze all remnants of a prior life on a site, here the architects opted to not just preserve these trees, but to make them part of the project. Since the structure occupies approximately half of the site – and because the trees are distributed across its slope – the house necessarily surrounds and frames them. Now embedded within, the trees definitively characterise the spaces they inhabit.

Some of the products included within the house were designed by Moneo Brock, including the colourful, geometric carpets and the PlexiJazz screen of translucent acrylic and coloured vinyl

The architects add: ‘The second motive was to open up the public spaces to the sky and the views, and to maximise the area of green space in those parts of the site not occupied by the building’s footprint. Because the land slopes steeply down from the entry level, we were able to invert the conventional arrangement by placing the bedroom floor below the entry floor instead of above. This has various positives. The bedrooms take advantage of the earth’s thermal mass, bringing natural freshness to the house and lowering cooling loads during the many months of high temperatures in Monterrey. This arrangement allows the more public floor to enjoy the better views that its higher position affords and it provides direct access to the garden for all the bedrooms.

The large pendant lamp was designed by Arik Levy for Vibia

‘A final consequence of this arrangement is that the outdoor public areas – the pool, barbecue and outdoor entertaining space – is shifted off the ground plane and onto the roof. The roof terrace is accessible directly from the street entry, from the more private breakfast terrace off the family room, and from inside the house by way of the main stairway. It is conceived as a large exterior room, delimited by walls and windows that frame spectacular views of the Monterrey mountains.

‘A third motive was that each major interior space should enjoy a direct connection to its own corresponding outdoor space, be it a garden, a patio or a terrace. This meaning that each room is associated with a different landscape, giving it a unique character and an individual light; be it reflected, direct or filtered.

Natural texture and tone, seen in stainless steel and light timber, are a foil for the vibrant decorative palette in the kitchen / casual dining space.

‘In order to gather the outdoor spaces into the project, a series of large wall planes intersect in the house’s centre and project into the surrounding outdoor space, creating large surfaces that run continuously between the interior and the exterior spaces. Rather than create an architecture of discreet closed volumes, this constructivist assembly allows the walls to be read as independent, plastic elements; their transgression of the building enclosure effectively blurring the distinction between inside and outside. Having always admired the use of colour in Mexico, from its vernacular architecture to that of the masters Luis Barragán and Ricardo Legorreta, we applied strong colours to these walls, not only because we typically use colour in our work, but also as recognition and homage to this notable heritage.’