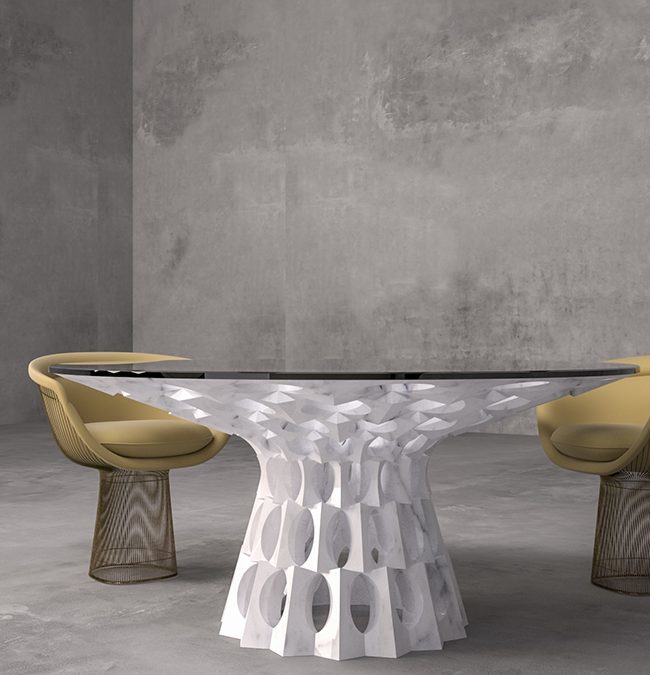 The Dama cabinet, Ginevra table and Pavo carpet will be the true protagonists of the concept of sophisticated contemporary living proposed by the brand.

As in 2016, the Verona-based company has again been influenced by the beauty and charisma of the East, exploring new frontiers and forms. With its new creations, Citco Privé confirms its mastery in the shaping of a simple, static material like marble, giving it lines and forms whose only limit is imagination.

The ancient art of origami, an evocative game of folds and curves of paper that give rise to extraordinarily complex figures, is the inspirational theme behind the Dama cabinet and the Ginevra table.

The cabinet has been designed for insertion in an exclusive setting. The inlaid doors with glossy finishes, and the combination of different materials like marble and brass, reproduce the effect of silk in both visual and tactile terms, bringing fluidity and movement to the retro geometric design, and adding lustre to the whole, suggesting a sense of timeless perfection.

Ginevra, the latest table in the Citco Privé collection, is formed by two distinct elements: the top with its classic and traditional look, is combined with the rational, elegant design of the total white base, crafted with alternating full and empty zones in a game of simple but never banal forms that generates an image of enduring charm.

Not just furniture: the Citco Privé collection also adds Pavo, a carpet with a lively, exotic character. In perfect “jungle” style, it suggests the forms, colours and features of tropical nature, a rainbow shifted towards bright tones of green, bronze and blue, where peacock feathers become the protagonists.

The new Citco Privé collection will be presented at the Salone Internazionale del Mobile, from 4 to 9 April 2017, accompanied by other creations that will make their debut for the occasion.