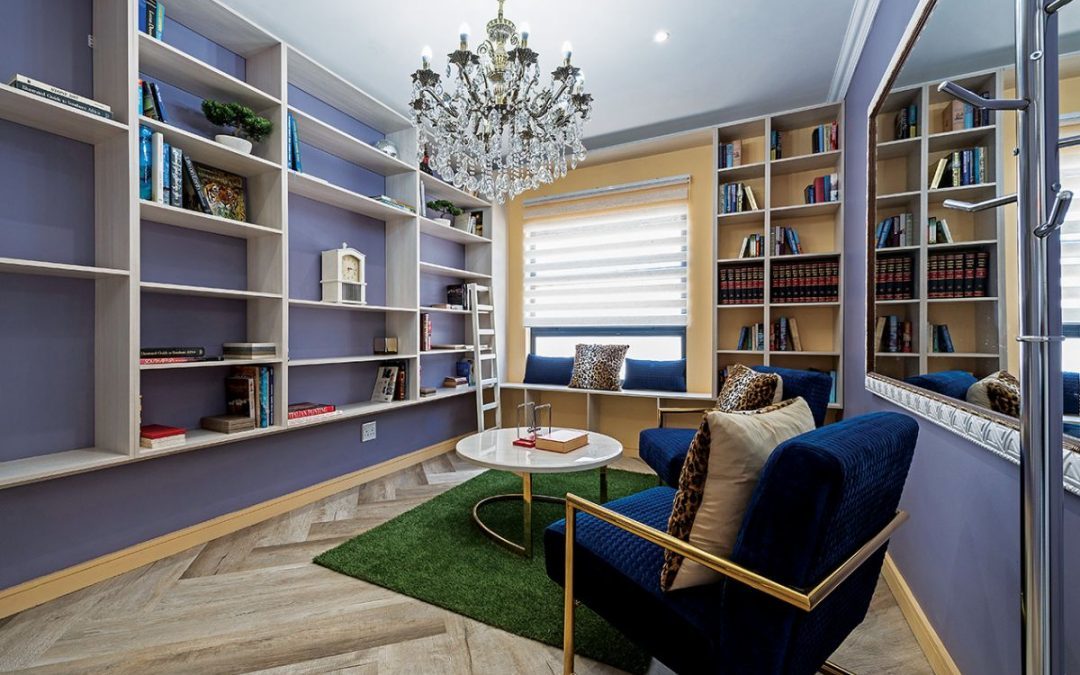 Win a Home is an interior design reality TV competition conceived by Private Property magazine and hosted by the SABC3 talk show, Afternoon Express. Three Design Duos, with the help of their magazine mentors, decorated three units at the Eye of Africa Golf Estate. One was Team Habitat.

In the kitchen, Grundig sponsored all the appliances, Caesarstone the counter-tops and Belgotex the laminate floors. Team Habitat built a dining space that extends into the lounge area; the chandelier here was designed by Stephen Pikus. This kitchen is all about maximising the space and so the duo installed cupboards up to the ceiling and created a dining table from an extension of the Caesarstone countertop. The unusual light fixture and choice of Plascon paint colour added impact.

In the living room, the Habitat duo collaborated with Sally Chapman of Chapman Collection, who created a custom wallpaper for the corridor adjacent to the lounge. They constructed an architectural partition between the kitchen and lounge, which helped to define both areas. Further, they created a small bar area where they used leftover Caesarstone Moorland Fog offcuts as shelving. They added up-cycled barstools that were repainted and clad with verdant re-upholstery, courtesy of Belgotex. Team Habitat’s lounge added the final flourish to the duo’s unconventional design style, but added practicality included the partitioned bar / lounge area within a relatively compact living room. Signature over-the-top elements included custom-made Truk lights; made from recycled truck air filters they were designed by Stephen Pikus and reflect dramatically off the myriad mirrors within the interior.

Team Habitat aimed to create impact by using Caesarstone and the master bathroom invoked a change from the duo’s usual style – being much simpler and more minimalist. The colour palette here was neutral and paired down compared to that of the master bedroom; and considering the water scarcity in South Africa, Grohe products proved to be the perfect choice. These products are designed to use less water and be more eco-friendly. They also chose Geberit for the required technology in concealed plumbing and water-saving; this for the selected rimless toilets. In the guest bathroom, the duo chose a zebra theme in a fun tile pattern and elected to exaggerate the dramatic look with a dark tile choice in the shower. The judges liked both the practicality and innovative design and also commended the duo on maintaining their boldness, but in a much more measured approach to give the bathroom focal points. Team Habitat were declared the winners of the bathroom challenge.

Each design duo was paired with a specialist landscape company to help them create the outdoor spaces. Team Habitat’s garden has a moat running almost its full length and includes two patio spaces. One features Belgotex turf and is intended as a fun outdoor area, while the second is a more sophisticated formal patio adjacent to the living area. In Team Habitat’s garden the judges were impressed with the clever use of space. The strong use of green in the artificial turf on the patio and the way the moat leads one through the garden were recognised as the strong points. Team Habitat were winners of the garden challenge.

To ensure a specific signature in the master bedroom, Team Habitat entrusted reams of chosen fabric to the ladies of Leratong Skills Centre where it was transformed into curtains, pillows and a plush throw for the Sealy bed. The master bedroom is evocative of flamboyant style. From a wall of gold, to a graphic wallpaper and a geometric pattern created with various shades and finishes of Plascon paint, there is no mistaking the eclectic signature, which also celebrates the African wild. The judges commended the duo on this well executed design and received high praise for its international feel, the clever paint technique and the space’s oddly appealing excessiveness.

The design partnership of Abiah Mahlase and Bradley Muttitt live by the mantra ‘more is more’. Abiah Mahlase considers himself a creative who embraces art in all its forms. A graduate of the London International School of Fashion (LISOF), the flamboyant designer is also a talented sketch-artist and is a part-time lecturer at LISOF. Although partner Bradley Muttitt originally graduated with a B.Com in Communications, he subsequently chose a career in design in order to fulfil a need to express his creativity. He also studied fashion design at LISOF, where he too is now a part-time lecturer. It’s a given that this design duo introduced alternative and eclectic design elements to Win a Home Season 4 via a signature that appealed to those who appreciate the unique.