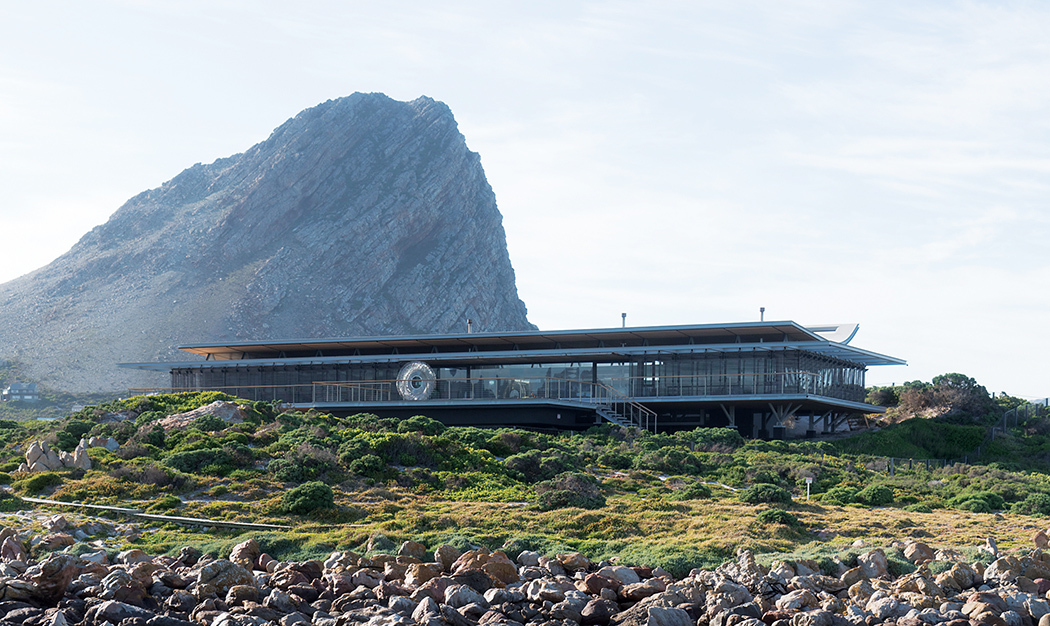 This windswept dune and rock peninsula represents a unique 10 500 square metre location in the Kogelberg Nature Reserve. Rooi-Els, where the house is located on a promontory, is on the opposite side of Table Bay from Cape Point and an existing, essentially modern dwelling was erected here several years ago. The built structure is around 850 square metres.

The central living area is the core of the house. There is access on both sides: on one side to the courtyard and on the other to the pool and deck. The external ceiling is cedar. Garapa was used for the external hardwood decking.

The brief to the architect / designers was to adapt the existing house to create a calm, secure and easily managed retreat, which would provide a comfortable lifestyle for a family or couple. High-quality workmanship and low maintenance were priorities. Considering the location and dramatic weather patterns on this coastline, the aim was to refurbish the property so that it would not require constant maintenance while withstanding the elements. Further, that it should function in such a way that would make it accessible and convenient for anyone to use and enjoy.

Says architect Jenny Mills: ‘The original house was a starkly exposed glass box and the client’s aim has been to transform it into a tranquil, private home. It needed to feel ‘grounded’ in order to induce the warm, earthy feel he required.

‘Although the new owner appreciated many aspects of the original home, there were some aspects that he was not comfortable with, these included a lack of privacy, safety and adequate ventilation. The original glass sliding doors did not seal correctly, allowing wind and sand to constantly blow through the interior. It also had overly sophisticated technology that was complex to use, prone to failure and required constant maintenance – particularly the computer controlled hydraulic lift shutters.

‘In approaching this brief the external envelope of the house was the first issue to resolve. The original perimeter external shutters, which were designed to be lifted and lowered through a home automation system, have since been permanently fixed; in either the open or closed position. In the bedrooms they are in the down position to make these areas secure and private. In contrast, the shutters outside the living areas are now permanently open.’

Glazing has been reconfigured or replaced so that it is either permanently closed or replaced with the latest version of frameless stacking doors, which seal correctly. The 10-15mm thick safety glass, in a combination of fixed and sliding / folding door systems, has been installed throughout. Slim-line windows were added for ventilation and to help moderate humidity.

Further, the front entrance door – previously facing into the wind – has been moved to the newly created wind-sheltered courtyard. The surrounding environment and neighbourhood are deemed very safe and the adjacent properties in the area have no fences, and are open to the street.

There are three bedrooms on the main living level. The master suite, which is situated at one end of the house, is separated from the rest of the bedrooms by the kitchen / living / entrance multipurpose reception area and consists of a bedroom and bathroom / dresser pod. The third bedroom at the other end of this linear layout has a custom-made, small children’s loft bed with 360-degree water views.

Shutters in the bedroom are now permanent fixtures that protect against the extremes of coastal climate, while also fulfilling a security role.

The living / kitchen / entrance area opens up to the entry courtyard on one side, featuring a stunning, custom painted mural wall by Vajrakaymen, and to the pool deck and the expanse of the ocean on the other; there are spectacular views of the mountains from every part of the home. A library / study with timber panelling, reclaimed from the floor of an old 1720 farmhouse, adjoins another of the bedrooms.