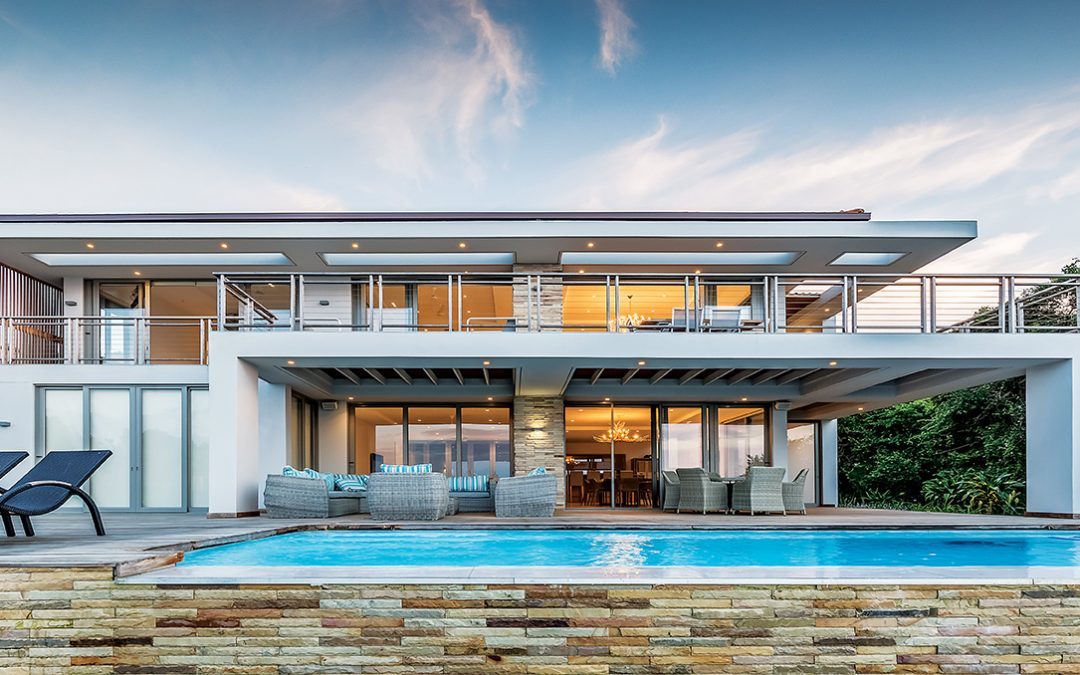 Originally this site and estate was a sugar cane farm, which was later sold for resort / residential development. After a few failed attempts by others, Tongaat Hulett purchased the property and Zimbali evolved, which after much research was developed into the highly sought-after estate it is today.

The covered terrace is at the rear of the home, on both top and bottom floors, and has two sets of multiple sliding / folding glass doors to access the other living areas.

This was one of the first houses constructed in Zimbali (1997) and featured face brick, green aluminium windows and roof tiles. It was a double-storey, split-level structure with a free-standing double garage and was built by the original owners as a retirement home. Being nature lovers, they chose to live in this coastal forest with a protective sea view.

Recalls architect Kevin Lloyd: ‘This was the first section of Zimbali to be developed and sold. The design code for the estate was influenced by the tropical architecture of the Far East because of the similarity in climate and to a certain extent the building materials. The Zimbali Lodge and Clubhouse drew their inspiration from the Aman boutique hotels in Bali and Thailand, and their influence and impact became the inspiration for the KZN Balinese style.

Chandeliers are used in key areas throughout the home, styles being specific to the area.

‘The existing house was entered via a vegetated canopy over a steep curved driveway and was set back from the building line on the seaside width to provide protection from the wind. It did have a deck area under a Milkwood tree, with a porthole view of the breakers and magnificent shoreline in front, but was well hidden in the existing and planted vegetation.’

The brief has an interesting history. It resulted from the purchase by a family trust to house two families – the original owners and the new purchasers – both couples being senior citizens wanting to downsize. The initial intention was merely to alter the existing house so that each owner lived on a separate level with direct access from their own garage.

The house has a guarded entrance, i.e. the stone clad wall and pivot timber gate at the entrance hide what lies beyond: a water feature, internal garden, glass enclosed study projecting into the tree canopy to the side, and uninterrupted ocean views.

This was achieved, but in the interim the original owners moved away and the separate unit was now to be allocated as a holiday unit for the new owners’ children. Says Kevin Lloyd: ‘It became evident that with the change in brief, the house should take better advantage of the seafront location, that the existing house be demolished and a new structure moved forward. The new owners then had a change of heart and, after the design had been approved by the Estate Review Committee, it was decided the house would be for one of the children and their family as a permanent home.

The kitchen is open plan and a large sliding door retracts to access the covered terrace, dining and bar area.

‘The original brief was more conservative in nature, requiring a slightly refreshed Balinese style with fewer dark colours. The new occupant however, altered this signature; wanting lightness, openness and contemporary living. The build now was to house a couple, with children who were to be very much part of the home and how it was to function. Downstairs then became the young adults’ domain and upstairs the parents’ quarters.