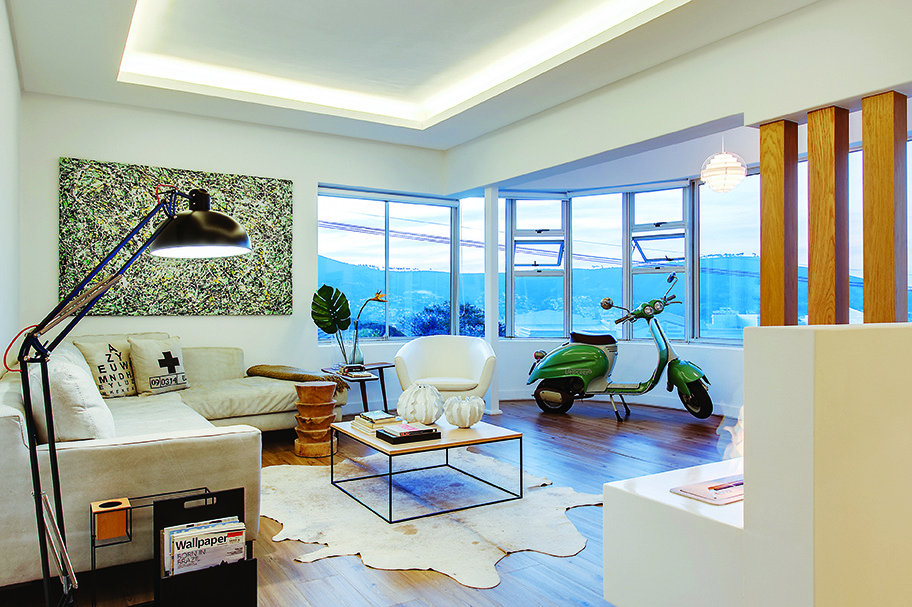 It was cellular in planning, which meant that no interior spaces had a dialogue with one another. The brief to the architects was to create a gallery environment in which to live.

They recall: ‘The owner has a serious passion for art – mostly contemporary – which has been collected over decades; the layout had to provide the possibility to showcase these pieces and interchange them over time. A second prerequisite involved the views offered from within, which were to be enjoyed as much as possible. Lighting was another important element during both day and night, and most lighting – besides those luminaires used for art – is diffused light.

Eclectic – even quirky – this interior is evocative of Cape Town as an international design city.

A partial wall / divider succeeds in delineating the dining area and offers hanging space. The kitchen is well planned and finished.

Artworks are carefully chosen and not intrusive. Conscientious use of space is considered throughout.

‘The challenge was to remove as many walls as structurally possible, but also to create a degree of privacy within. During construction, a void was discovered below the timber floor boards, which allowed the creation of additional space. But it also involved a rearrangement of the interior spaces; essentially, everything needed to be shuffled around within the shell. There were no specific problems in this procedure.