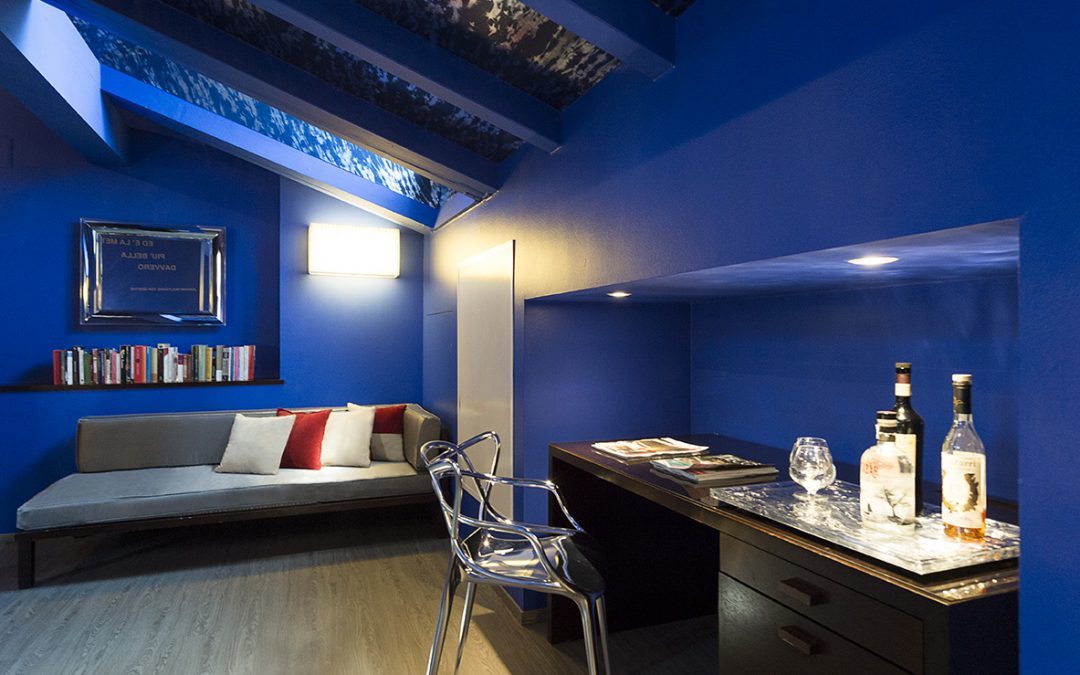 The Hotel Al Cappello Rosso is one of the most elegant hostelries in the centre of Bologna. This medieval city is located between Milan and Florence and has seen tourism grow exponentially in recent years, thanks to international media coverage.

The Hotel Al Cappello Rosso decided to renovate the three suites situated on their top floor to satisfy the more exigent needs of foreign clients. Yet, this has not been a simple renovation of rooms because it incorporated the development of a new concept,  where the Italian set designer Mauro Tinti executed this vision. Tinti has attended the prestigious Motley Theatre Design Course in London and has extensive experience in the Italian opera sector.

Says the designer: ‘There are three attic rooms with exposed beams and a sloping roof so as a result I decided to create a common thread between them, both thematic and decorative. The location of the rooms on the top floor, in contact with the sky and its light (the windows are skylights recessed in the roof) made me think about the flow of day to night. So I decided to create one room that would mirror dawn, another daylight and yet another replicating night.’

For the execution and the choice of materials that best matched with this concept, the hotel worked with a well-known Italian interior design studio, Doodesign, which has historic experience in the contract sector.

‘From the outset, Mauro Tinti communicated the need to create a perception, a living space that goes beyond the walls of the building itself. The goal was to create a sky signature that clads the ceilings of the three suites. The colours of the skies were then coordinated with all walls thanks to the originality of the Designers Guild palette. The luminous surfaces of Metal X and the silver / ultramarine combination of the Starglint, both by Artè, the flying machines by Fornasetti and the beautiful swallows by John Derian, provided the opportunity to realise the sought-after atmospheres.’ So says Claudio Volta, CEO of Doodesign.

The dawn room in particular, is characterised by a metallic coating embellished with oxidation that is followed in different shades, from pale pink to pale blue, from light yellow to intense gold. This allowed the designers to fully grasp the desired image for this cameo set in the heart of the city.  ‘The colour used on all the walls and beams is black, symbolizing the contrast and the passage from  night to the light of the rising sun. The chair and the lamps (both gilded) give touches of light to the whole atmosphere.’

For the day-themed room, a bright turquoise colour was chosen; luminous and enveloping with a pot-pourri of wallpapers, it evokes a graphic signature. All are different but reveal an airplane theme plus, clouds, balloons and swallows. Here, the Cole & Son and Designers Guild collections were key, allowing the team to combine Fornasetti with the freshness of John Derian’s new proposal.

Finally, the bedroom of the night is completely immersed in a vibrant lapis lazuli blue. This creates almost an electric sensation, using a blue and silver chrome background from which waves, ripples and bright points like stars seem to emerge. Even the furnishings have silver touches: the lamps, the large mirror and the chairs give the whole room almost a lunar character.