On October 13, the Irma Stern Museum will host the opening of Vestige, an exhibition of oil paintings by Jacqueline Griffin-Jones and Louise Almon. In the rooms of Irma Stern’s old home, the two painters, with their shared medium of oil on canvas, will show some of their most recent works.

The exhibition sees a maturation of their combined evolving thematic work which looks at their expressions around the intangibles of life.

This show will be the third for Griffin-Jones at the Irma Stern. Her last show, in 2014, saw the first signs of her extreme realism in her paintings, while her series of works to be shown in Vestige will present the continuation of this technique some four years along. The artist, based in Grahamstown, Eastern Cape, will exhibit a series of large and small works which explore the unearthing of irrelevant memorabilia. Feelings of restlessness and turbulence spread across the real and abstract canvases as the artist grapples with values and traditions in the midst of change. Griffin-Jones paints objects that are buried or suspended across the canvas to evoke a world turned upside down. 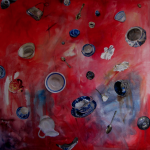 Well known for her series of oil monotypes, Louise Almon explores her subject with oil-on-canvas, expressively using the medium to capture the emotion of her subject through light and colour. Almon portrays people and places with a simplified gestural technique. She uses a particular energy around her medium to allow her subject to portray the fragility of life and the space between people. She manages to capture the fleeting moments of busy environments, be it the vast spaces between strangers or brief moments of contact. Almon’s curiosity lends itself to the feelings of spaces and how people engage in the anonymity of cities, often far from home, seemingly directionless and out of place, space. Her recent move from Johannesburg to Cape Town sees a gradual departure from her scenes of rust-orange downtown Johannesburg to clues of a new space, closer to the blues of the sea.

The two artists meet in the same space for the first time in thirty years, where they met at Rhodes University. This will be their first exhibition together.

The show will run from 6 – 20 October, with the official opening from 12pm on October 13. Entrance is free on 13 October, however, should you visit outside of the opening, there is an entrance fee of R20 for adults and R10 for learners.