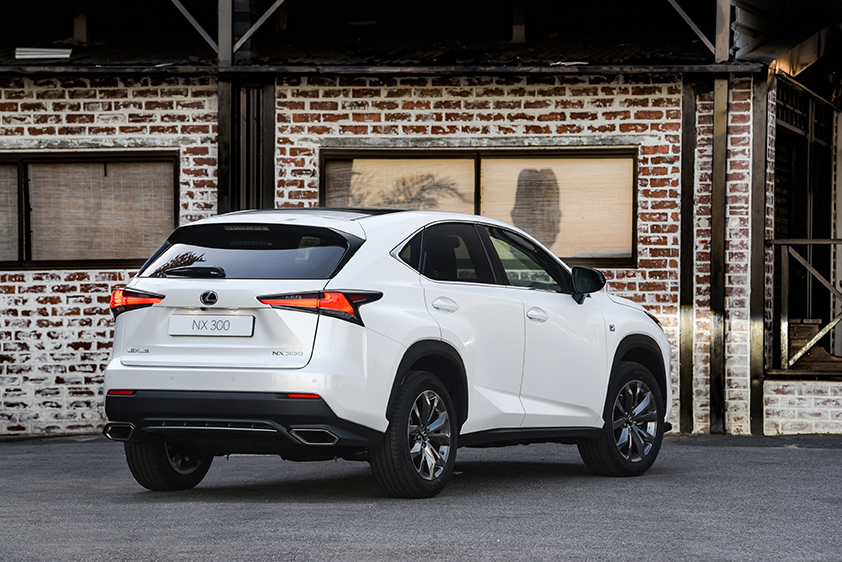 The Lexus NX was Lexus’ first foray into the compact premium SUV market. Featuring an angular design language, with strong body lines and prominent contouring and underpinned by the iconic Lexus spindle grille. For 2018, the chic NX receives some minor cosmetic surgery and tweaking of its standard specification roster.

As part of Lexus’ global strategy, the ‘200t’ moniker (signifying a 2.0-litre turbocharged engine) has been replaced by ‘300’. The 300 badging references offering an equivalent power output to that of a 3.0-litre power plant – adopted to achieve parity between the petrol – and hybrid engine models’ badging convention. The badging has been changed to NX 300 in E, EX and F Sport iterations respectively.

The existing 2.0-litre turbocharged ‘4-pot’ engine remains (on NX300 variations), offering 175 kW with 350 Nm on tap between 1650 and 4000 rpm. The twin-scroll turbocharger delivers a wide-spread of torque assisting with effortless acceleration.

In F Sport guise the NX packs an even greater visual punch. The spindle-grille ‘frame’ is finished off in a striking black chrome effect, which ties in with the dark F-mesh grille. The brushed-aluminium-effect lower apron creates a sporty appearance and ties all the frontal design elements together. Graphite-coloured vent trim on the edges of the bumper accentuate the powerful stance and F Sport identity.

The latest NX models are set to reach Lexus dealerships in January 2018.