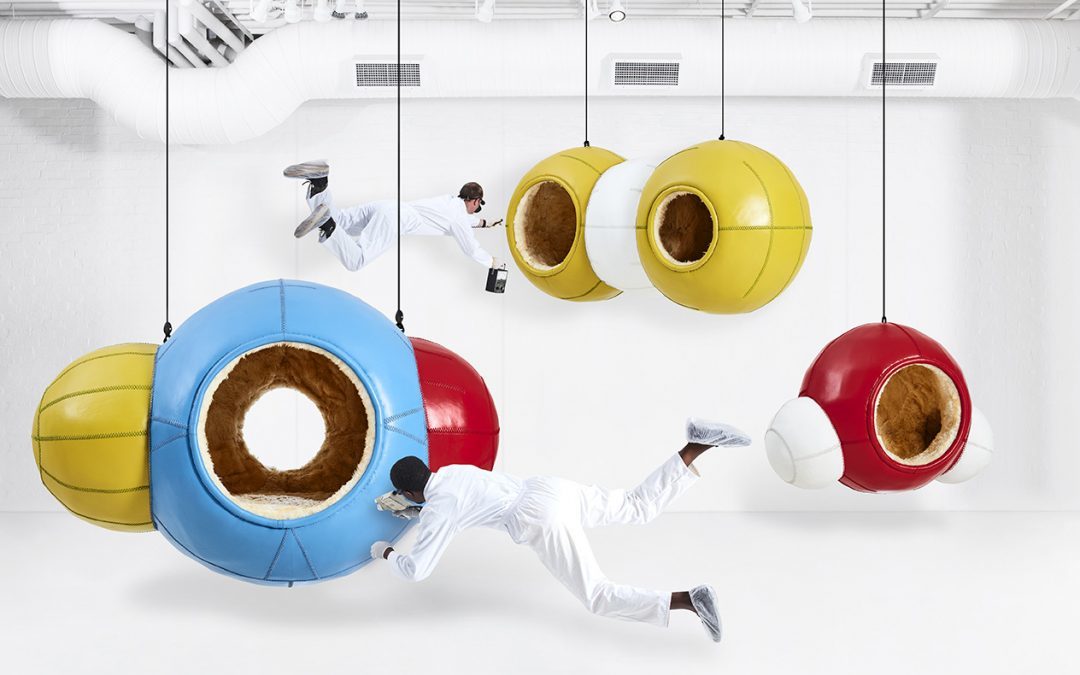 Southern Guild commissions, produces and exhibits contemporary collectible design by the most compelling talents in South Africa. The gallery has pioneered the collectible design category on the continent, propelling its artists and designers to make original work that is distinctly African and globally relevant. Its rigorous curatorial programme has shaped the world’s perceptions of African design and forged a unique vernacular in the international arena.

‘Rather than commenting on what it means to be a designer in South Africa today, these works remain open-ended and serve as observations and poetic glyphs that ask us to reflect on our relationships with each other and the world around us,’ noted Julian McGowan, co-founder of Southern Guild.

A new collection of leather hanging pods by internationally acclaimed artist Porky Hefer, titled Molecules, will form the booth’s centrepiece. The series comprises three large hanging orbs whose titles point to the chemical compounds they represent: Dihydrogen Monoxide, Fluoroheliate Monoxide and Hydrogen Difluoride. Wrapped in bright, brilliant leathers that reference the international colour codes all atoms are known by (white for hydrogen, red for oxygen, green for chlorine), they were manufactured by the leather artisans at Wolf & Maiden in Cape Town. Founder Wade Ross Skinner and his team of leathersmiths collaborated closely with Porky, applying the impeccable craftsmanship the studio is known for, albeit on a much larger scale. The pods’ interiors are lined with plush sheepskin, inviting people to climb inside and nestle within. Molecules follow the artist’s fascination with the reactions and energy a piece can generate in a space, and opens up philosophical questions around matter and the world we live in. Inspired by the fact that molecules are made up of atoms held together by chemical bonds that form as a result of the sharing or exchange of electrons, he asks us to explore the complex bond of human connection – to each other and, most importantly, to the natural world.

Bringing additional verve and dynamism to Southern Guild’s booth at Design Miami will be five pieces from Dokter and Misses’ first solo exhibition, Practically Everywhere, which experiment with jagged shapes, odd proportions and stacked forms overlaid with textural surface treatments. The works were inspired by the entropy and oversaturation the designers experience on a daily basis in downtown Johannesburg and in urban ecosystems in general. Inspired in part by Tramp Art and the notion of needing to be busy, the collection makes use of gestural marks, irregular forms and dysfunctional clutter.

Zizipho Poswa, whose large-scale ceramic sculptures were recently acquired by the Los Angeles County Museum of ART (LACMA), unveils a new series inspired by traditional African hairstyles, called Magodi (the local term for such hairstyles). Two monumental pieces, Magodi – Abongile and Magodi – Zoleka, are given traditional Xhosa names in homage to actual women who have been influential in the artist’s life. They ­retain the imposing sensuality of the artist’s previous work, rendered with increased technical complexity to convey the intricacy of woven, braided and threaded hair.

Celebrated fashion designer Rich Mnisi’s Nwa-Mulamula’s Embrace armchairs are an exciting addition to his debut collection of conceptual furniture, Nwa-Mulamula’s Chaise and Nwa-Mulamula’s Tears (a leather and bronze stool). With their rounded forms and strong physical presence, these works stand in homage to the memory of Rich’s late great-great-grand mother, whose teachings have lived on in his family generation after generation. Like his 2018 fashion collection of the same name, the chaise takes its title from this central matriarch – ‘Nwa-Mulamula’ means guardian. Rich has said: ‘She is a sacred, powerful and spiritual component of my being – although she rests as a guardian in an ancestral realm, her spirit, lessons and sacrifices have defied temporal limitations. I see her as symbol to pay homage to the role of African mothers whose stories are either seldom documented or given the light they deserve.’

Madoda Fani’s trio of side-tables in black clay continues his foray into ceramic furniture. The series – titled Itafile I, II and III after the Xhosa word for tables – utilises a robust mushroom shape while retaining the intricacy of the artist’s incised patterns. Hand-coiled and precisely carved, their rhythmical shapes call to mind overlapping fish scales or insect exoskeletons. Madoda burnishes and smoke-fires his ceramics according to the Zulu tradition (used most often in Zulu beer pots) and draws on a vocabulary of symbolic African imagery such as cattle. His recent work for Southern Guild ventures into new territory, seeing him expand his use of scale and materials, including bronze and wood.

The Intermissiøn Bench is the first limited-edition furniture piece produced by NØDE, a new design studio combining industrial design with modern production methods that comes out of Bronze Age Studio. Designed by Charles Haupt and Gerrit Giebel, the bench is produced out of a single piece of 20mm thick, airplane-grade aluminium plate. Due to the plate’s thickness, it was necessary to heat treat the aluminium to several hundred degrees Celsius, as well as use an 80 ton press in order to bend down the sides. Countless hours of hand carving ensued, with emphasis on the hollowing out of the seating area, as well as the final surface texture. With its anodised finish, the result is an object of simplistic, yet sculptural shape that is refined in its form.