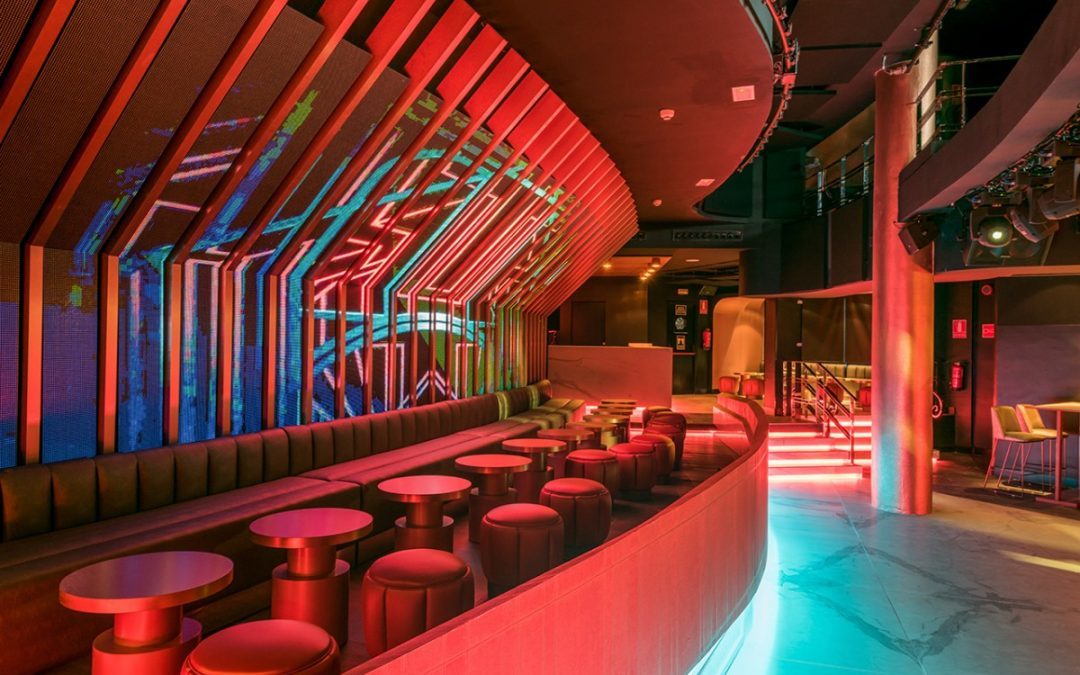 The Barcelo Theatre in Madrid, Spain, has been an emblem of greatness since its opening in 1931. Designed by architect Luis Gutiérrez Soto during the La Movida movement, the theatre became an architectural representation of the economic resurrection in Spain, the new Spanish identity and rationalism at its peak. Having undergone numerous renovations over the decades, owners Trapote Group brought in Cuarto Interior to head up the redesign of the second floor to inject a sense of continuity throughout the building. Here, the Sintered Stone, Neolith® by TheSize, had been specified for the floors, walls and furniture.

Originally opened as a cinema, then turned theatre, now a nightclub, the Barcelo Theatre has played host to generations of Spanish aristocracy and global celebrities. The stage has seen the likes of Prince and The Rolling Stones and to reflect this, Cuarto Interior ensured a redesign that reflected the building’s iconic history. Named “The Madrid Sky”, the second floor was a space for designers Jose Manuel Fernandez (Executive Director) and Germán Álvarez (Creative Director) from Cuarto Interior to create an interior that echoed yet modernised the original architectural rationalist design put in place by Gutiérrez Soto.

“The open space deserved luxury surfaces, modern furnishing and an interior design that was practical”, says Manuel Fernandez. “In high traffic areas by the DJ booth and large LED screen we needed flooring that would withstand scratches, high impact but still leave a lasting aesthetic impression – Estatuario was everything we were looking for. What made its application even more attractive was the option to bookmatch the slabs and create a uniformed mirror effect to add to the sense of consistency, still in keeping with the rationalist work of Gutiérrez Soto.”

“Rationalism in architecture pertains to accuracy in designing and to reflect the contextual influence in the original build, Cuarto Interior specified Estatuario, a design inspired by Carrara marble, from the Classtone collection by TheSize. When applied in bookmatch, the intertwining thick and subtle veins on the pure white base exemplifies the rationalist movement; a synthesis of veins organised in repetition to make sense of a naturally disordered pattern.

“We worked with a floorplan in the shape of a cross. To create symmetry on either side of the central spine, we raised the two opposing reserved seating areas, and specified Estatuario for the supporting pillars. This concept was implemented throughout the project, right through to the ultimate interior furnishings. Whatever we produced in the interior had to work in synergy with the lighting of the club. To merge with the bookmatch effect of the flooring, the lighting was organised in symmetry so the spotlights were not just randomly located, but strategically placed to magnify the veins of the flooring.”

The completed project is a harmonious amalgamation of coppery, earthy tones against the pure white background of Estatuario, exuding elegance, simplicity and class. To reiterate the success of the refurbishment, Cuarto Interior have been awarded first place in the professional category of the European Edition of “My Neolith Project 2016” organised by TheSize. Now, this award winning refurbishment project has cemented the architectural excellence originally created by Luis Gutiérrez Soto in 1931, and will continue to be the centre of Madrid’s social scene.