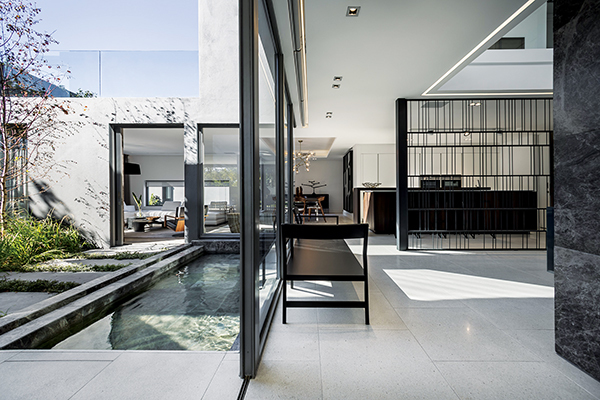 There was an existing house on this property, but 90 percent of the structure was demolished to make room for an extensive new build, which originally was to comprise six bedrooms. The architects and their client eventually settled on five bedrooms all en suite, with a study, which can double as a guest room. The total site area is 985 square metres and the built area 275 square metres.

Outdoor recreation and entertainment is well catered for.

Double volume spaces allow daylight to flow from the upper to lower levels.

The brief given to the designer / decorator was from an offshore family who frequently visit Cape Town and wished to build a holiday home. Architect Renato Graca recalls: ‘This is a large family and therefore the requirement for extended accommodation needs was a prerequisite. In order for everyone to have their own space in the house, wings were created around central courtyards – both internal and external – to allow for varying degrees of privacy.’

How was this brief successfully executed? ’Bearing in mind that this was to be essentially a family home with varying needs as members of the family partially or fully visit the home, the solutions were complex. They included the need to create an extended space, but without overextending it to the point that it did not relate design-wise to the remainder of the residence. This was specifically challenging because of the necessity to design spaces that would be as separate and as private as possible.

Interior elements and materials were chosen for simplicity and longevity.

‘This informed the concept of the courtyard, whereby one space can relate to another; this through the courtyard as well as via the double volume space at the entrance.

‘When working with existing buildings, 80 percent of problems are only identified when starting construction work. We realised much of this when we commenced and therefore eventually demolished most of the structure as it was not feasible – structurally and financially – to retain it.

‘During the elaboration of the brief we had to consider the location of this home in a conservative southern suburb of Cape Town; a further challenge was to respect the context, but to purposefully not adhere to it. To this extent we retained much of the street aesthetic to relate to its context, yet modernised the remainder of the residence as much as was possible. The interior was designed to be warm and inviting, but also to remain neutral, as there are very often a number of inhabitants within the residence with varying tastes. Being a holiday home, the finishes had to be hardwearing and maintenance-free so as to retain a measure of longevity.’