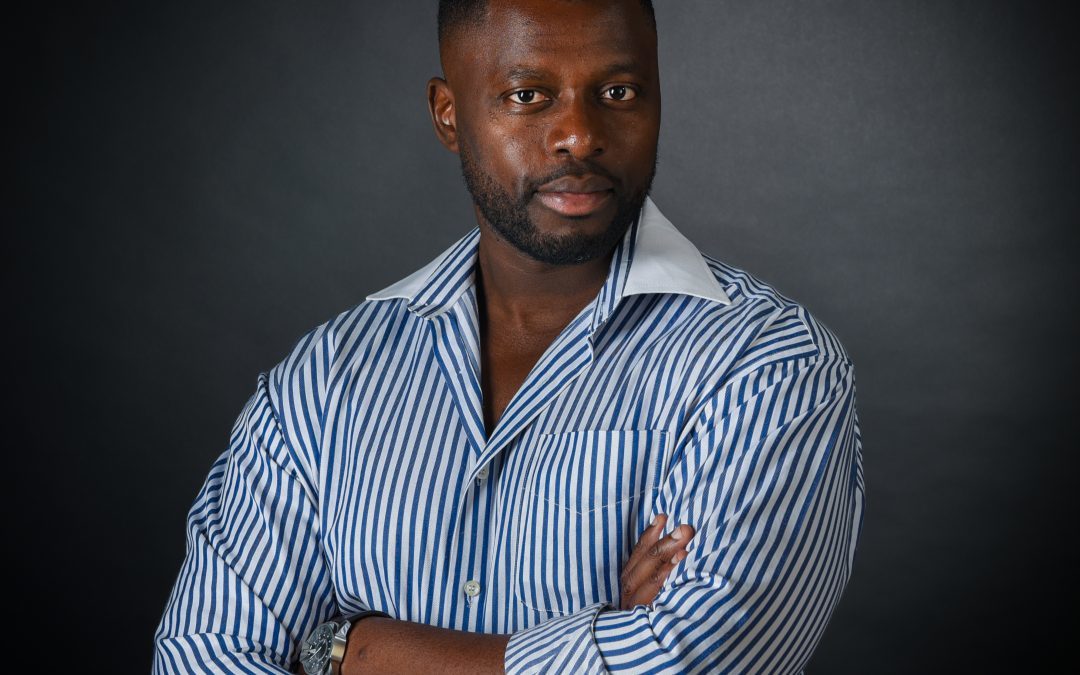 The first solo exhibition of Beninese Artist at the Galerie Cécile Fakhoury presents a dozen large format works that have never before been shown to the public. Born in Bouaké (Côte d’Ivoire) in 1986, Roméo Mivekannin lives and works between Toulouse (France) and Cotonou (Benin).

Strongly rooted in their respective identities and stories, the artists represented by the gallery distinguish themselves through the use of a language that breaks down barriers and rejects geographical stigmatisation. Observers of a world they live in, these artists take an enlightened and critical look at our society. The diversity of their aesthetic gestures, committed to capturing the complexity of history, participates in the writing of a living memory and asks us to reconsider our own relationship to the world. 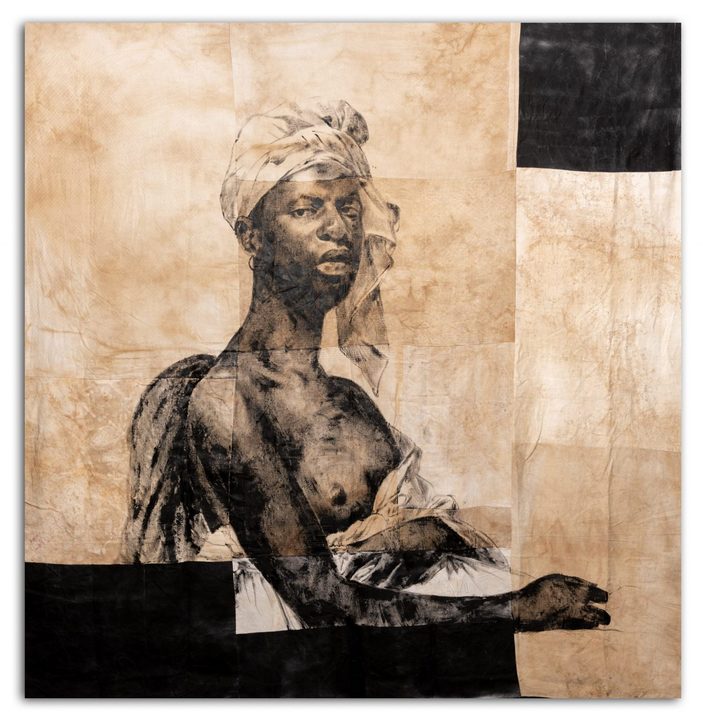 The artist Roméo Mivekannin draws his inspiration from photographic archives and iconic paintings emblematic of the history of Western art. From Jean-Léon Gérôme’s ‘The Slave Market’ (1873) to Gustave Manet’s ‘Olympia’(1863) and the first photographic portraits of the colonial monarchies of the second half of the 19th century, Roméo focuses particularly on the ambiguous representations of black figures, sources of both fascination and fear, sometimes anonymised, eroticised or objectified and intended for the almost exclusive gaze of a male and Euro-centred viewer.

The artist’s works; black acrylic paintings on canvases tinted by repeated elixir baths, question a marked iconography inherited from the systems of human trafficking and domination that stemmed from slavery and colonisation. Drawing direct links between past and contemporary history, the artist chooses to take the facts of these historical representations and subvert their primary narrative in order to construct, somewhat ironically, his own vision of common narratives.

For his first solo exhibition in Africa, Roméo Mivekannin deploys a process of eloquent sculptural conversation. From one work to the next, the compositions of the canvases are in constant dialogue with a complex visual history made of direct references to classical painting and to the stereotyped images that defined the representation of black people in 19th century Europe.

Faced with the inability to identify himself with these images and to weave a thread through these historical narratives, Roméo fits into these representative regimes, substituting his own portrait for those of the original black characters. The repeated appearance of the artist’s face sometimes in the foreground, sometimes hidden in the crowds of figurants is disturbing. Like an uncompromising assertion, the repetition embodies his desire to reclaim a regime of visibility from which he had hitherto been excluded. In his work, the act of representation is an intimate ritual of accession to identity. Each work has its own historical time. The canvases are plunged several times into elixir baths, the composition of which only the artist knows, giving them each their unique coloring. Then comes the moment of painting. 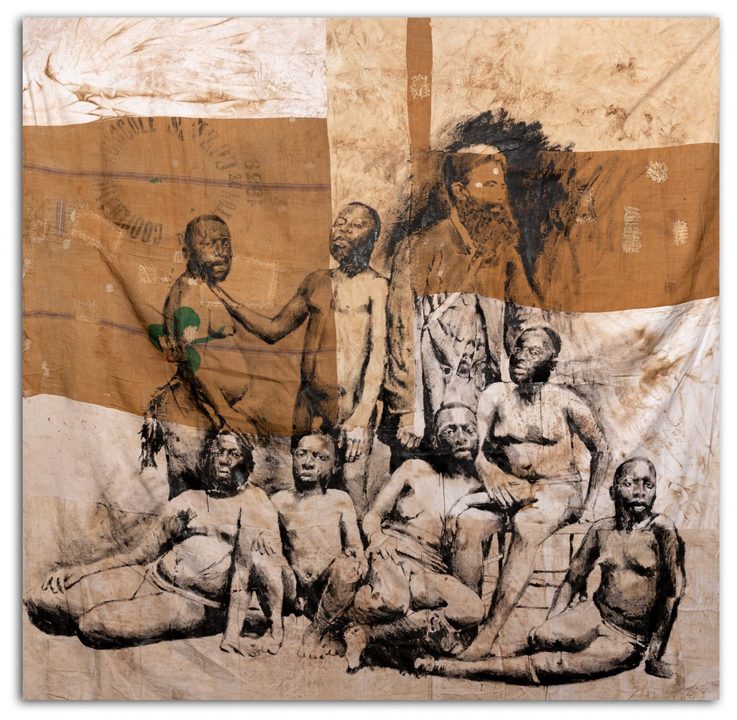 ‘In the voodoo tradition’, explains the artist, ‘each god corresponds to a deceased ancestor. When one wears the mask of one of these gods, of a person who has lived, it is an act of liberation’. In his works, Roméo questions the invisible and the hidden. He brings to light the workings of representation that carry the systems of domination and introduces a subtle critique, on the borderline between rewriting a collective memory and repairing a fractured personal identity.

After training in cabinet-making and then studying Art History, Roméo chose to join the Ecole Nationale Supérieure d’Architecture in Toulouse. In parallel with his studies, he developed a personal body of sculptural creation, and experimented with several media, from sculpture to painting.

Following his studies, he devoted himself to his activity as a visual artist while starting a thesis that brought together art history, sociology and architecture.

At the crossroads of inherited tradition and the contemporary world, Roméo Mivekannin integrates his creations within an ancestral temporality, making his own rituals, which echo voodoo cosmology, very present in Benin.

In the image of an initiation rite, the artist dips the sheets that will compose the background of his works, in different baths of ritual solutions, elixir baths, some of them having been buried in certain places of the world, related to the history of colonization. The actual time of these sheets, themselves inherited and worn out, is then mixed with the temporalities evoked by the subjects of his paintings. Memory and time thus become the very material of his works, as well as the technique.

The artist’s work was part of the selection for the Dakar Biennale in 2020. He has also been part of several group exhibitions in France, notably at the Chapelle de Velmatier. In 2018, he also published a novel, La Malédiction des Orishas, edited by Les Indés.

The showroom of Galerie Cécile Fakhoury opened its doors in Abidjan, Côte d’Ivoire in September 2012. In May 2018 the gallery inaugurated a second space in Dakar, Senegal and a showroom in Paris. The gallery aims to promote contemporary art in Africa. It offers visibility to creativity and contemporary artistic diversity in Africa through its programming of solo shows and group exhibitions, participation in international art fairs and biennales, and through its collaboration with foreign galleries.