Bernard Fanchette was born and educated in Mauritius and at the age of 20 left for university in Paris and subsequently the USA. He holds a BSC in Economics and Management and an MBA in International Business and Management. Initially, his business direction had nothing whatsoever to do with interior décor and design. 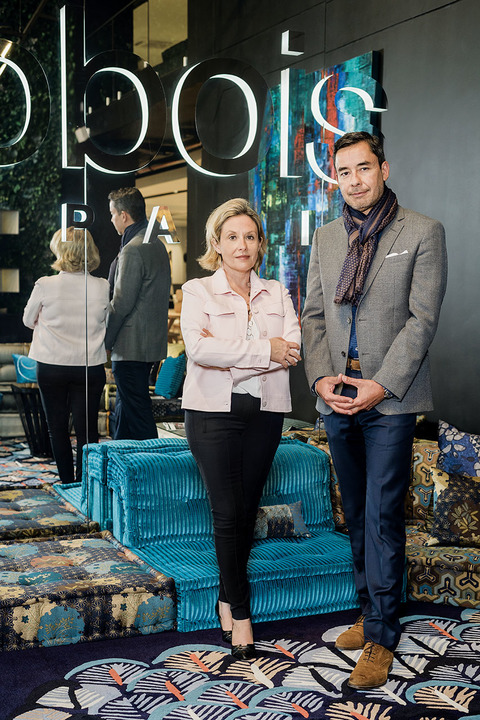 He recalls: ‘However, during the course of my career in Mauritius, Madagascar and Indonesia in the retail sector I became quite exposed to the furniture market. Later, after various travels to Paris, Milan and Rome – beautiful cities renowned for their architecture and furniture industry – a strong desire surfaced to be more involved professionally within this field, whilst applying the skills learned in retail during my career.’

Sandrine Fanchette was born and educated on the west coast of France, until the age of 18 when she left for tertiary studies in Spain and the USA. She holds an MBA in International Business and Marketing gained in San Francisco. This is where she met Bernard Fanchette some 25 years ago. She later added a BA in Interior Decoration  from France.

She says: ‘My earliest interest in creative expression and interior décor / design began in San Francisco where I hesitated between a career in business or that of an architect. When I worked in Madagascar in the textile field (1998), as a side business I began designing and exporting some interesting palisander wood pieces of furniture to Mauritius.

‘Later we opened our first shop in Mauritius, literally in the sugarcane fields in the north of the island and in that period we were importing furniture from Madagascar, Bali and China. It proved to be the right time, in 2007, as Mauritius was opening up to the world in enabling foreign residents to acquire local property. This worked to automatically raise the bar for us as little of any worth could be found in terms of décor and furniture on the island at the time. After a few years sourcing from China – and the quality associated with this – we decided to shift to exclusive furniture, designed and manufactured in Europe; pieces synonymous with quality and craftsmanship. The choice evolved naturally towards Roche Bobois, which is a world leader in this field.

‘So, after a couple of years of sourcing products in Asia we realised that we needed to move up in the value chain and provide exclusivity to our customers. During our travels to Paris we had always checked out the Roche Bobois stores in either Saint-Germain or Rue de Sebastopol (the largest in Paris with
3 000 square metres of retail space). We were awestruck by the quality of the furniture, the association with world renowned designers and the bi-annual collections. And further, the fact that – despite being a luxury furniture brand with a strong design appeal – the products were easy to use. In other words synergising intelligent and practical luxury.