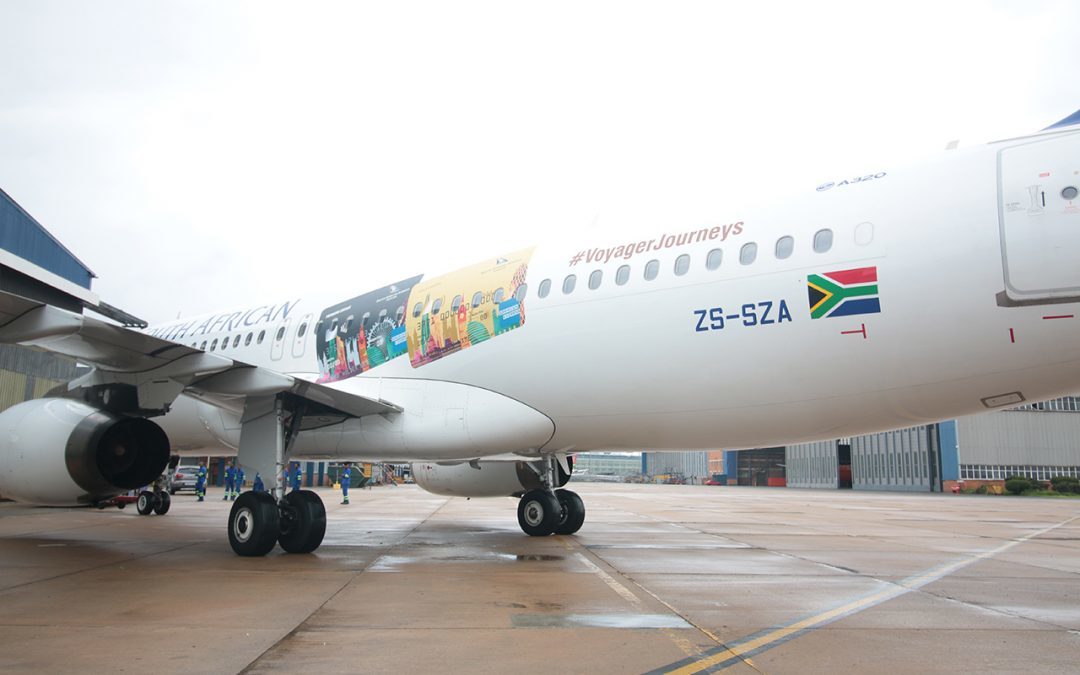 South African Airways (SAA) Voyager and Nedbank today launched a first in the world – a cheque card which guarantees users to earn air miles per transactional swipe. The SAA Voyager Cheque Card launch which took place at SA Technical premises was co-hosted by Chief Executive Officer (CEO) of SAA Vuyani Jarana and CEO of Nedbank, Mike Brown. According to both, the card represents a significant shift in the way in which air miles are earned. Traditionally, airline reward programmes have always offered co-branded credit cards to customers to allow them to earn air miles based on their credit spend.

Even if you are not a frequent traveller, the fastest way to earn miles is by using any of SAA Voyager’s Credit or Cheque Cards from Nedbank.  “We have tailored this unique offering as part of our efforts to diversify platforms through our customers are able to earn miles with ease and as frequently,” said SAA CEO Vuyani Jarana.  “Also, while most of our programme members prefer using their miles for flights, Voyager Miles can be exchanged for a wide variety of travel rewards, including stays at selected accommodation partners, car hire, exotic cruises, duty-free shopping, online gifting, and even health spa experiences,” he said.

He cited the steady growth in uptake and usage of SAA Voyager Credit Cards as evidence of the immense success of this partnership. Since the launch of the programme in 2006, more than 90 000 South Africans have acquired one of the SAA Voyager Credit Cards available through Nedbank and to date, these cards have been used to pay for almost 80 million national and international transactions worth nearly R90 billion of qualifying spend.  SAA CEO, Vuyani Jarana, in his address at the event added that since the inception of the partnership, 13 billion Miles were accrued by the SAA Voyager co-branded credit card and 255 thousand Continental and Inter-Continental Companion tickets were earned, an exclusive and highly-valued offering for this customer segment.

“The strong relationship between Nedbank and SAA Voyager has helped to realise the lifestyle and travel dreams of South Africans for over a decade, thanks to the highly popular SAA Voyager Gold and Premium Credit Cards,” Brown explained.  The arrival of the new SAA Voyager Cheque Card, a world first is set to extend the significant benefits of the Voyager programme to many more South Africans from all walks of life,” he said.

According to Brown, the SAA Voyager Cheque Card represents Nedbank’s and SAA’s response to growing consumer demand for a transactional card that allows them to earn SAA Voyager Miles without the requirement to qualify for credit.

“While the SAA Voyager Credit Card has been widely embraced as an appealing and easy way to quickly accumulate SAA Voyager Miles, we recognised the importance of broadening access to this lifestyle enhancing opportunity. The new SAA Voyager Cheque Card will afford more people access to the globally recognised SAA Voyager frequent flyer programme, and the many benefits and rewards it offers.”

In addition to further enhancing the appeal and value of the SAA Voyager cards offering, the partners used the event to announce a number of exciting enhancements to the already compelling SAA Voyager Credit Card offering. These include:

The opportunity for SAA Voyager Premium credit cardholders to earn an additional 15 000 bonus miles per calendar year by spending R300 000 or more;

Another exciting announcement made at the launch was that Nedbank and SAA Voyager has partnered with respected South African lifestyle bloggers, GoPhari and How Far From Home.  They are the chosen travel blogging ambassadors for the SAA Voyager credit and cheque cards who will be embarking on a trip around South Africa, Africa and the world, and blogging about their experiences.  The bloggers will be showcasing the many benefits the cards offer including paying for transport and accommodation costs and buying everyday items – all of which will also earn them valuable Voyager miles along the way.

Brown emphasised that the creation of the SAA Voyager Cheque Card is another example of the value that can be unlocked for consumers through innovative partnerships. “Our shared customers have been enjoying the vast benefits and travel opportunities provided by the SAA Voyager credit cards for the past 13 years.  It is a milestone in travel to form part of this initiative,” he said.