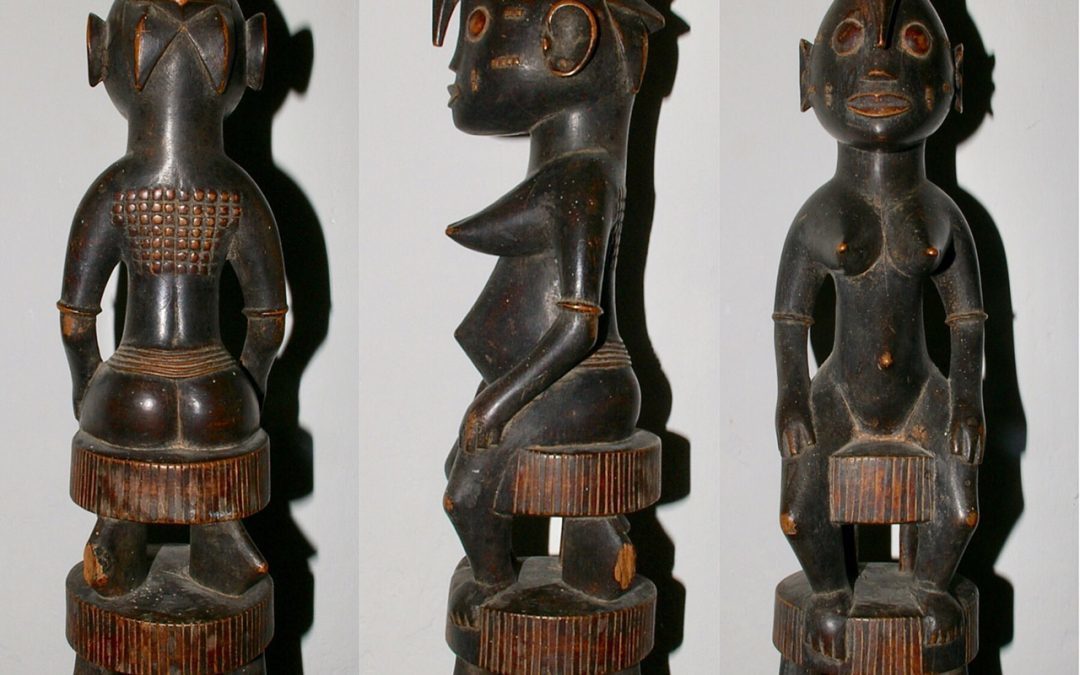 Tribal Art London is the UK’s premier collectors’ event in the field of ethnographic culture and indigenous tribal art. The fair opens 4-7 September 2019 at Mall Galleries, London SW1 with a Preview on Tuesday 3 September. Now in its 12th year, TAL 2019 takes the theme Mother, Muse and Maker, and brings together more than 20 international dealers, each a reputable specialist in fine, original purpose works of art drawn from all corners of the globe. Every item offered for sale is chosen for its quality and authenticity.

Marcuson & Hall A wooden Umncedo penis cap Zulu, South Africa wood 19th century 4 cm high x 5 cm wide Provenance: Mottat, Lausanne Switzerland Alain Guisson collection, Brussels This is a rare old and well carved example of an umncedo. This excellent example has a design that combines alternating horizontal and vertical grooves. After initiation boys were expected to wear them and in the 19th century it was said, that a man was not properly dressed unless he was wearing his penis accessory.

Marcuson & Hall A Tutsi carved wooden container Tutsi, Uganda wood, carved and scorched early 20th century 27.5 cm high x 11.5 cm wide Good condition, signs of use and age Wooden containers were carved by Tutsi men and often mimic the shape of the baskets, which are made by women. This particular example has a more fluid, curvilinear design as opposed to the more typical geometric zig-zag patterns. It may be a regional variation associated with the Tutsi of Uganda, according to Margaret Trowell in Tribal Crafts of Uganda where a similar piece is illustrated on page 114.

Marcuson & Hall An Umncedo penis cap Zulu, South Africa Ilala palm leaf, incema grass 3.5 cm high x 6 cm wide Provenance: Alain Guisson collection, Brussels This is an old and finely made example of an umncedo. Boys started wearing a penis cap after their initiation and in the 19th century it was said that a man was not properly dressed unless he was wearing his penis accessory.

Marcuson & Hall A Saqa-ni-wai earthenware vessel Fiji, Melanesia earthenware with resin glazing 19th Century 3.5 cm high x 22.5 cm diameter Good but used condition; two nodules missing, minor scratches and glaze loss Fijian earthenware pottery is an ancient craft dating back to the original settlers, the Lapita culture of 1000-900 BC. Pots were made by the women of the coastal, sea-faring clans and are constructed with slabs of clay, which are assembled and paddled into shape using a technique known as “paddle and anvil”. The finished vessels are glazed with a resin from the Dakua tree which is poured on the pots while they are still hot from the firing. Dakua is the local name for a genus of the Agathis, an ancient evergreen conifer that dates back to the Jurassic period. In New Zealand it is known as the Kauri

Tribal art – be it African, Oceanic or South American – centres on performance and ritual. Objects that go with these pursuits, however, are tied into the ritual of life: birth, puberty, marriage, and death. Tribal art at first glance seems male-dominated but the contribution that women have played as muses and makers is undeniably important. This year, Tribal Art London focuses on the theme Mother, Muse and Maker, not only to explore the history of women within the tribal world, but also to discuss the role they now play in the tribal art market as dealers and collectors.

The ‘Mother’ figure is seen in almost every tribal African society and its meaning besides the maternal (see image above from David Malik) can also signify the protection and growth of a tribal society. A saying from the Luba people based in the Democratic Republic of Congo is ‘kingship is a woman’ meaning that to be a good ruler you must look at the traits of women.

Female beauty is also celebrated. Beauty depicted though a mask such as the Punu example from Gabon (see the image above from Bryan Reeves) not only celebrates female beauty but also harks back to important female founding ancestors.

In the creation of tribal art, gender roles are strict and throughout primary societies around the world there is a tendency for men to create works out of hard objects such as wood or metal while women have focused their creative talents on softer materials such as hides, fibres, and clay. An example is cloth made of bark, known as tapa (see above illustration from Joss Graham) and common to Polynesia, which is made by the women of the tribe, who decorate it with flowers and leaves as well as iconography that depicts tribal events.

This year TAL will organise a series of tours around the fair including a focus on textiles by women and the role of adornment in tribal culture. The annual TAL Catalogue will contain articles covering the role of females in tribal societies including the importance of carved hairstyles in Sowei masks, and the roles of women in Zulu society.

Philip Keith – Yoruba ivory tapper, iroke ifaNigeria, possibly from Owo.Iroke is an instrument used, in conjunction with a divination board and 16 kola nuts, in Ifa divination amongst the Yoruba. The instrument is used to tap the surface of the divination board when the diviner is consulted when bad luck or illness beset individuals. Carved with a powerful female Ifa divination cult devotee, kneeling in submission and nursing her child.

With six female dealers exhibiting, TAL will also look at the women who have shaped and continue to influence the world of tribal in the UK. Through a series of interviews, we delve into what it is like to be a female dealer and collector in an otherwise male-dominated industry.

A newly published book Maternity: Mothers and Children in the Arts of Africa by Herbert M. Cole will be available from Charles Vernon Hunt. It explores the theme of motherhood across the continent and over time, with a focus mostly on sculptural representations, and on mother/child sculptures in particular.

Kezhia Orege Harari tribe basket Ethiopia mid 20th century 75.5 cm high x 75.5 cm wide The Harari tribe from the East of Ethiopia are renowned for their skill of basketry making. The traditional complex patterns, shapes, and colours in the basketry was an arduous and intricate task that required great skill. The various patterns on the basket was a reflection of the cultural history of the tribe within the community. The basket would have been used for wall adornment, presentation of food on special occasions, also a gift to mother in law of the bride. Masterpiece of the basket making and its display in an homestead was a revered aesthetic Art. The display of the basketry demonstrated the epitome of this fine Art by the woman who were the only producers of the baskets. Ex collection of an English collector, who lived in Addis Ababa in the 70s.

Kezhia Orege A female Dinka corset Sudan mid-20th century 28 cm high x 18 cm wide £2,500 Stunning rare beaded female necklace/bodice from the Dinka tribe, the intricate complex bead work encapsulates the essence of their stylish, romantic tradition as the beads are worn by young females symbolising their eligibility for marriage. The design, style, colour and materials used are all attributes of wealth, status and age. The bodice is made of different coloured glass beads, fibre and cotton textile.

Kezhia Orege A bronze Nupe necklace from the Vere tribe The Vere tribe is from Eastern Nigeria, close to the Cameroon border mid-20th century 46cm long £700 This is a necklace even though similar ones were worn as waist beads. The heavy necklace comprises 45 brass beads, two brass rings, one small brass ring and one big central large cushion shaped bead cast with pearled edges and strung on cotton twine. It has a nice patina consistent with age and usage. It’s a lost wax system necklace.

Tribal artefacts appeal alike to the artistically inquisitive as well as the aficionado. Buyers of every age attend the Fair, and in 2019 the organisers are delighted to welcome their youngest-ever (at 18) exhibitor, Tom Hurst, a third-generation dealer, showing at his first art fair; Molly Hogg, specialist in textiles and jewellery, and Monika Wengraf with African art and artefacts, both from London, and Patric Claus (Brussels), a specialist in tribal art from the Democratic Republic of Congo, sharing a stand with fellow countryman and regular exhibitor Emmanuel Amelot.

Galerie Lemaire Yoruba, Gelede mask The masked festival Efe/Gelede consists of masquerades, songs and dances in honour of ‘our mothers’, whose power is especially manifest in elderly women, female ancestors and female orisha. The power of ‘our mothers’ has creative as well as destructive expressions, especially in the form of witchcraft.

Galerie Lemaire Asmat shield, £2,800 Asmat shields were made for a special ritual which was held before a headhunting expedition. The shield was given the name of a deceased family member. During a raid the shield had to give the owner special powers and courage. Old Dutch collection

Newcomers Molly, Monika and Tom join the Fair’s many long-term exhibitors including co-founding organiser Bryan Reeves of Tribal Gathering and other UK-based exhibitors including Cordelia Donahoe, specialist in ethnic jewellery, textiles and adornment; Joss Graham, well-known London dealer in ethnographic textiles, particularly those of India and Africa, and works of art; Sam Handbury-Madin, a young, third-generation dealer with wide-ranging tastes; Philip Keith with a particular interest in art from Nigeria, South Africa, New Guinea, Polynesia and China; Kenn MacKay, with a special focus on American Indian art; David Malik focusing on the material culture of Central and Western Africa; Kezhia Orege with tribal adornment; Marcus Raccanello with Polynesian art, and Ian Shaw a specialist in African art. Bibliophiles head straight to the stand of Charles Vernon-Hunt, a specialist in tribal art books.

Tribal Art London is an important focal point for international and UK collectors. It is renowned for offering an exciting diversity of works for sale with prices ranging from the low hundreds to over £20,000. Tribal Art London attracts dealers, art institutions and private buyers from across the world.

Louis Nierijnck The body adornment of the Himba people, includes a pair of anklets, also worn as a protection against snake-bites. Ekori headdress, worn after marriage. Also various neck ornaments. The semi-nomadic Himba live with their cattle and goat herds in Kaokoland in Northern Namibia. Instead of cloth, they wear various body ornaments and all bare skin is anoited with ‘otjize’, a mixture of butterfat, aromatic herbs and red ochre powder. ‘Dressing’ is a lengthy ritual, each morning. The ‘otjitze’ protects against the sun and harsh enviroment of the dessert. The body ornaments are made from leather, shell, grass, plastic, copper and so typical, steel nuts. All of these with thick layers of ‘otjitze’. Hairstyle and jewellery play a significant role among the Himba. It indicates age and social status within their community. The earthly red ochre connects the Himba adornment with the African land.

Louis Nierijnck In Hinduism, the goddess Durga, also known as Shakti or Devi, is the protective mother of the universe. She is one of the faith’s most popular deities, a protector of all that is good and harmonious in the world. Sitting astride a lion or tiger, the multi-limbed Durga battles the forces of evil in the world.

Entry to the Fair is free: for information visit www.tribalartlondon.com. Fair opens 10.30am daily from Wednesday 4 to Saturday 7 September.